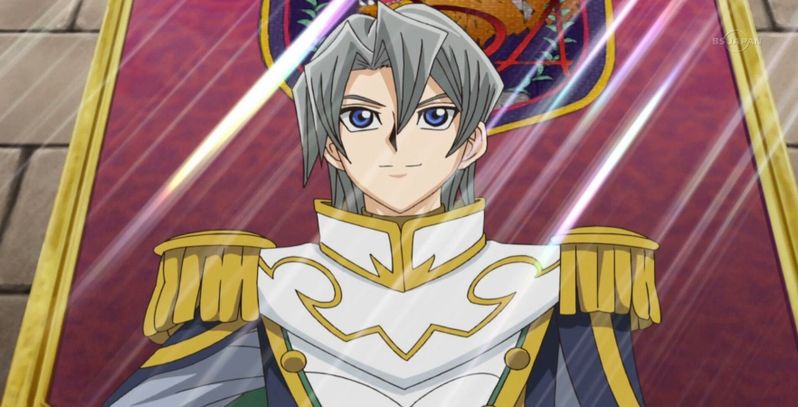 Get your game on! Yes, it’s time to talk about the best duelists in the second season of Yu-Gi-Oh, Yu-Gi-Oh GX.

Yikes. Well, what else can we expect from an academy made by Seto Kaiba? Though it doesn’t quite have the nostalgia factor of the original series, GX was known for its affable protagonist, the introduction of the most well-supported card archetype in the game ever, and some pretty awesome duels. So let’s take a look at who made the top ten, based on their decks and level of success in the series.

Bastion makes it onto this list more as a matter of course than anything else. He’s supposed to be this really focused, analytical member of the Ra Yellow dorm rooms. But then he runs into Jaden and hits a brick wall, only managing to beat Chazz to give Chazz one of his necessary defeats that helps him grow into a better character.

He claims to have an ace level deck for each Attribute, but we only ever see his Water and Earth decks before he realizes none of them are good enough to beat Jaden, so he constructs a brand new deck...and still loses. He always offers a challenging match, but he’s not the person to look to to string wins together.

Take Rex Raptor, make him take his gimmick much more seriously, then toss him into a Duel Academy, and you get Tyranno Hasselberry. Well, mostly. Rex’s Dinosaur deck was an absolute mess, which is why he lost to Joey even back before he knew what he was doing.

But Tyranno’s Dinosaur deck centers around the actual theme of evolution, drawing on his lower-level cards to put major bosses on the field like Super Conductor Tyranno and Ultimate Tyranno. One of the higher leveled Ra Yellow duelists, Tyranno tested well even if many of his duels end in losses because he’s being thrown into matches with some of the most relevant characters on the show.

The Obelisk Blue dorm contains the highest-ranking and most talented members of the Duel Academy, so it’s no surprise that Alexis Rhodes joins her fellow members on this list. Like many of the other characters on this list, Alexis relies on fusion summoning, the primary summoning type on GX, but that’s not all she does.

Later in the series, she upgrades to the Cyber Angel archetype, which encourages the relatively obscure Ritual Summoning, as a way of helping her keep up with the ever-growing powers of everyone else.

Axel is one of the latecomers to the series, arriving in the second half as a mercenary from the Western Duel Academy overseas. He starts out as a mercenary working for Professor Thelonious Viper, then eventually becomes a member of the main group.

RELATED:Yu-Gi-Oh!: 10 Storylines That Were Never Resolved

Axel actually doesn’t have very many losses under his belt, as his Volcanic deck is incredibly efficient at dealing lots of burn damage very quickly. Despite having fewer duels than most of the people on the list, Axel’s also got fewer losses, with only one noticeable one to Jaden. He even went up against a major villain in the third season and battled him to a clean draw.

For whatever reason, in the second half of the series they decided Jaden needed a story that led to him getting his own Yami. A twisted Duel Spirit that knew Jaden in his previous life, Yubel possesses a handful of duelists, testing Jaden again and again until he finally agrees to bond with them.

As they’re possessing these Duelists, Yubel gets into matches with a ton of major characters, and typically walks away with a victory each time. This happens in spite of their deck constantly being different, meaning Yubel isn’t just good with their deck, they’re just a good player, period.

For an affable hick that uses a deck full of cuddly animals, Jesse Anderson is surprisingly good. He really only loses a handful of matches in the entire series, several of which are against the main character himself, who never really loses in the first place. The Crystal Beasts are an archetype which work off being sent to the spell and trap zones after being destroyed, with the intention of summoning the deck’s boss monster, the powerful Rainbow Dragon.

This is another thing that makes Jesse even better than he comes off in the series. For a good part of the show, he doesn’t even have his deck’s boss monster: Rainbow Dragon hasn’t been printed yet when he first shows up, but he still puts up the Ws.

As a member of the Obelisk Blue class, Zane is the best duelist at the Academy when Jaden arrives, and he proves it by beating the breaks off of Jaden early on in the series. But GX was surprisingly good at forcing even supporting cast members to experience some amount of growth.

After Aster gives Zane his first real L, Zane loses it and goes on a spiral of losses before finally deciding what really matters to him: winning at all costs. He switches from his already powerful Cyber Dragon deck to the even stronger Underworld deck that relied on Cyberdark monsters, once again catapulting himself to the top.

Aster earns his spot on the list if for no other reason than in their second encounter, he beat Jaden so bad, he couldn’t see his cards anymore. But even without that, he appears on the scene with the powerful Destiny HEROes, essentially the edgy 90’s version of Jaden’s more optimistic Elemental HEROes, and just starts racking up wins left and right.

It makes sense considering he’s still in his teens and is already a legendary pro Duelist when he arrives at the Duel Academy, garnering praise even from Pegasus, who calls him one of the best Duel Monsters players ever.

Though they turned him into a bit of a cartoon in the dub, Chazz Princeton still undergoes the most progression both as a person and as a duelist in GX. He starts out as a stereotypical stuck up member of the upper-class Obelisk Blue dorm, but after being humbled he learns to see the value in all cards, and becomes one of the most effective duelists on the show.

This is shown through Chazz constantly switching between decks, from the VWXYZ machines to the Armed Dragon deck, all the way to the Pajamas. And despite constantly being forced to switch strategies, he still finds a way to win...aside from when he’s up against Jaden.

There’s no curveball to throw here—like it or not, the best duelist on this show is the main character. It’s not really a surprise, his Elemental Heroes are incredibly versatile, with fusions granting him access to a monster for nearly any situation that could possibly arise.

And all of that’s before he gets his upgrade to the Neo-Spacian monsters, which are cards that he somehow got to make up all on his own. As the main character, Jaden has more duels under his belt than anyone else in the series, but despite that he really only has three losses in nearly 200 episodes.