The cards that make the "virtually invincible" Blue Eyes White Dragon look like a joke.

While ATK isn't everything in Yu-Gi-Oh! - especially in a metagame that prioritises swarming, field-levelling and hand traps - back in the early days of the game, the player who summoned the most powerful card first was more often than not guaranteed a win. With very little in terms of decent back-row support, a Blue Eyes White Dragon was almost enough to end a game, the "legendary dragon"'s ferocious attack annihilating the opponent's Level 4, circa 1400 ATK, Monsters with ease.

Of course, Yu-Gi-Oh! has come a long way since sheer power hit the 3000 ATK ceiling, with too many Monsters with 5000 ATK to list here. Moreover, a number of Monsters with "?" as their printed ATK are often able to hit the field with much more power to boot, and while a number of these ? ATK Monsters rarely accumulate enough power to face off against a Blue Eyes, those included here are real powerhouses which are almost impossible to defeat without the help of a well-timed Trap.

And while there are more ways to clear the field than every before, there are few things more intimidating than a Monster with enough ATK to take out your Life Points in one fell swoop. 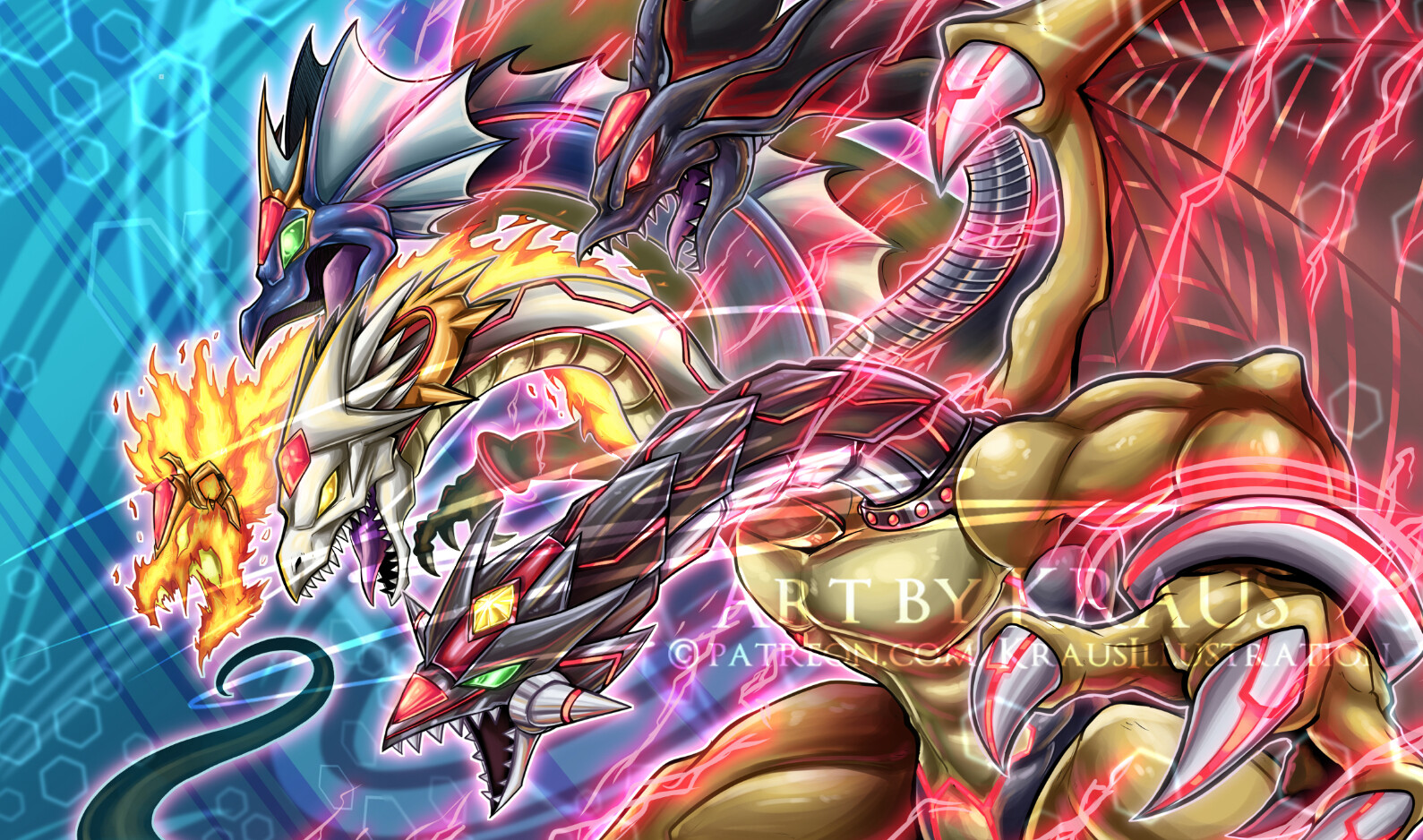 When Five-Headed Dragon was first released way back in 2006, it was the most powerful Monster in the game, standing tall with an unbeatable 5000 ATK points.

Five-Headed Link Dragon, the card's 2019 retrain, is even better. While it doesn't have any more ATK than its predecessor (and, being a Link Monster, has no DEF to speak of), it is unaffected by other cards' effects, making it a near-invincible powerhouse... provided the player is able to banish 5 cards per turn, that is.

Somewhat surprisingly, Five-Headed Link Dragon is arguably harder to summon than the original. While it doesn't require Polymerization (or Dragon's Mirror), having to send five Monsters to the field to Link summon this beast is more than worth it -- especially if the opponent's field is clear, providing the perfect opportunity to nab a OTK. 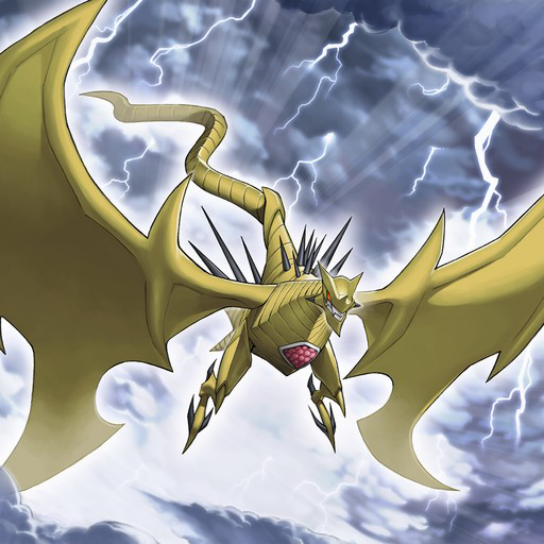 Another 5000 ATK Dragon, Malefic Truth is easier to summon than the Five-Headed fiend, and boasts a more powerful ability to boost.

While it is vulnerable to other cards' effects, Malefic Truth Dragon is able to clear the opponent's field with ease. When it destroys an opponent's Monster by battle (which would be almost every time it attacks, unless if the opponent happens to wield another card on this list), all their face up Monsters are destroyed -- clearing the way, perhaps, for a fatal attack by another 5000+ powerhouse, and absolutely devastating any duelist who dares to get in this DARK Dragon's way. 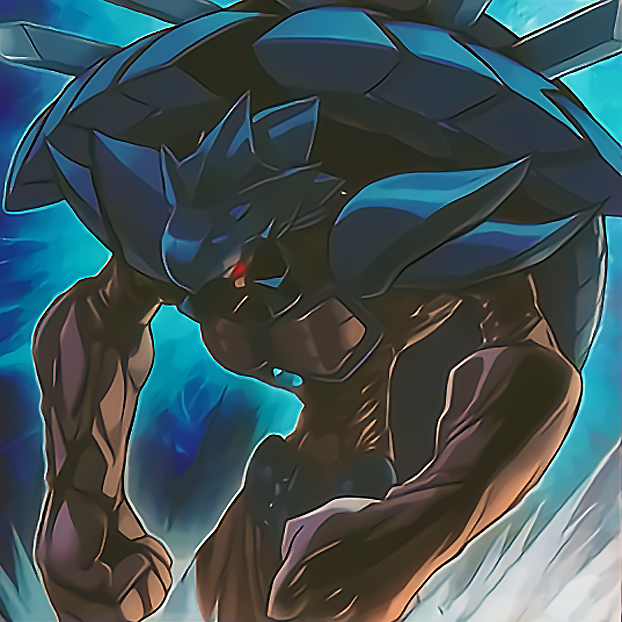 The ultimate manifestation of darkness, Dystopia The Despondent bears striking similarities in its design and specifications (it is a DARK Fiend, and its Summon requirements revolve around four Level 1 Monsters) to Exodia.

And, like the most powerful creature in the Yu-Gi-Oh! anime, Dystopia packs a punch few duelists are able to overcome.

Another 5000 ATK 5000 DEF creature, Exodia's stats match Malefic Truth Dragon's, but like Five-Headed Dragon, the giant is unaffected by card effects and cannot be destroyed, albeit only during the Battle Step.

While Dystopia The Despondent certainly comes with a few drawbacks (the Fiend prevents other Monsters you control from attacking), its sheer power makes it a staple in any Exodia deck seeking alternative win conditions. 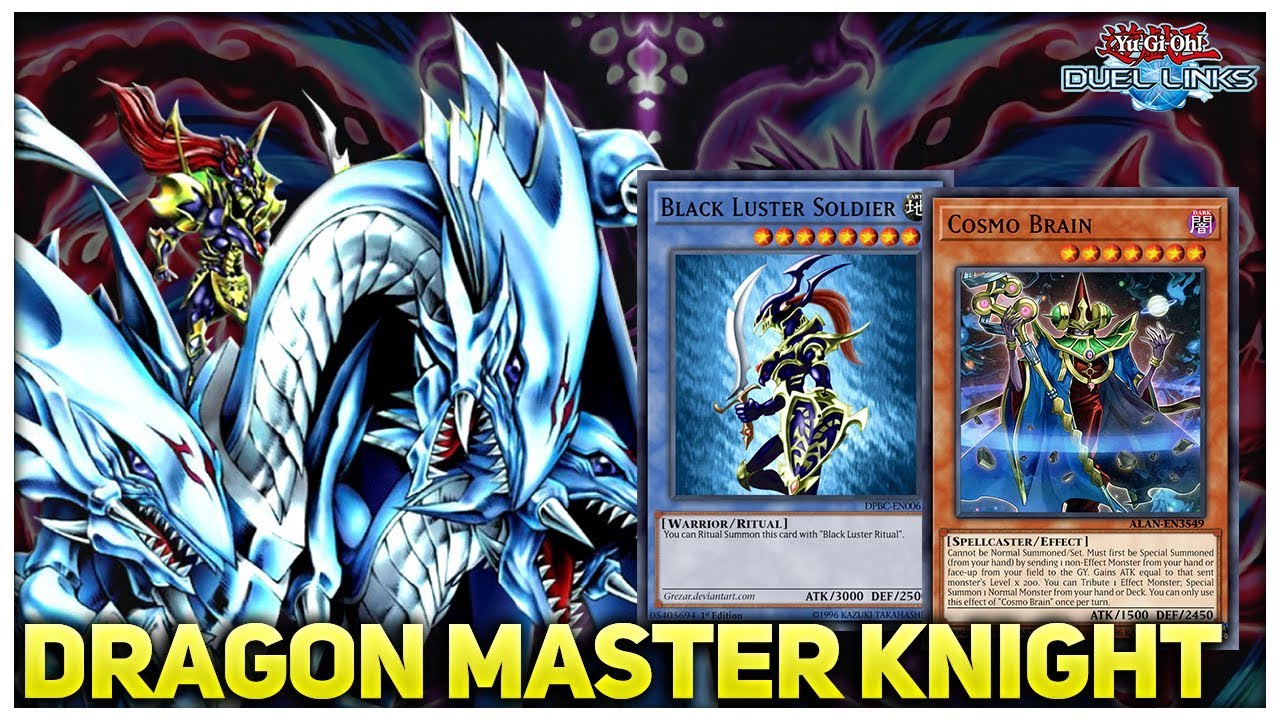 The foil to Five-Headed Dragon, Dragon Master Knight - the ultimate symbol of Yugi and Kaiba's duel styles coming together - packs the same base ATK as its DARK Dragon rival, but takes the edge due to its power-bolstering effect.

While Dragon Master Knight is a pain to Summon (Blue-Eyes Ultimate Dragon, which already boasts 4500 ATK, is one of its Fusion Materials), it's more than worth the sacrifice to bring out this beast.

On top of its base 5000, Dragon Master Knight gains an additional 500 ATK for every other Dragon you control. Being a LIGHT Monster, the Knight can get through Five-Headed (and Five-Headed Link) Dragon's defences, and destroy its rival with ease. 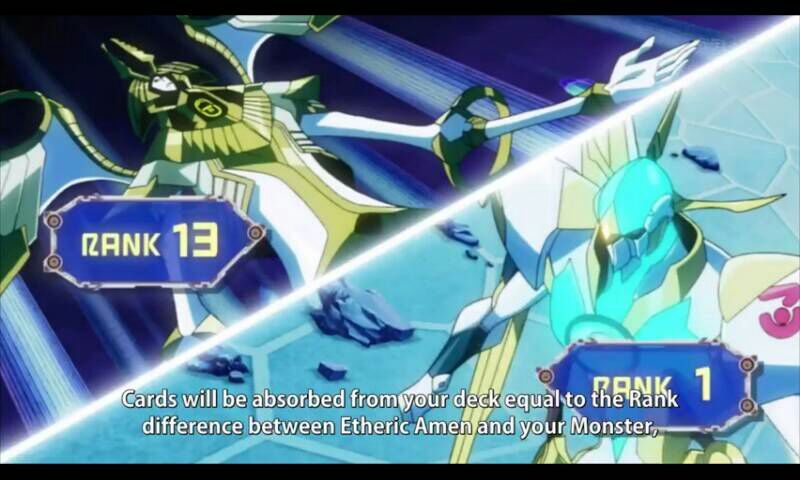 Another LIGHT powerhouse with a base rate of 5000 ATK, its measly 4000 DEF is easily forgiven when New Order 13's ability is taken into account.

The strongest Fairy in the game, Etheric Amon is an Xyz Monster that is able to absorb the power of the opponent's cards.

Gaining 100 ATK per card attached to it, Amon can quickly absorb enough cards to overpower the previous cards in this list in no time.

While it doesn't offer any in-built protection from card effects, the ability to essentially mull the opponent's deck and turn their cards into Xyz materials makes this Rank 13 LIGHT Monster a true force to be reckoned with.

5. The Winged Dragon Of Ra 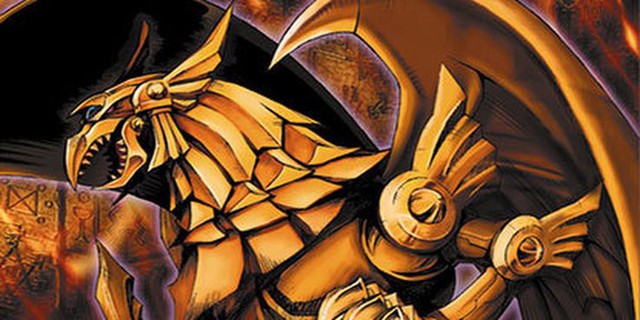 Considered to be the most powerful of the Egyptian God cards, The Winged Dragon Of Ra's anime effect was so vast that the Divine Beast ended up being published as not one, but three separate cards, each focusing on a different aspect of Ra's effects.

A ? ATK Monster, Ra drains the player's Life Points until they only have 100 left, its ATK equalling the Life Points taken away. Of course, leaving oneself with vulnerable with only 100 Life Points is a risky move, but on a clear field Ra can help win an OTK. 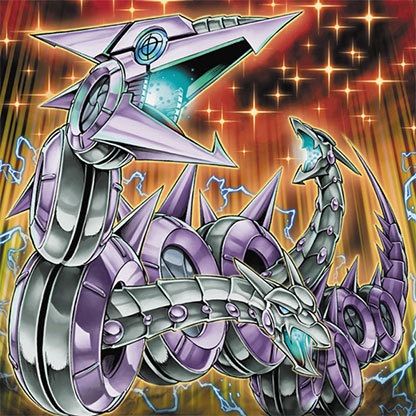 A 0 ATK Monster, Chimeratech Fortress Dragon is the weakest on this list in terms of its printed ATK.

However, it also has the potential for a near-unstoppable 12000 ATK.

A Fusion Monster, Chimeratech Fortress Dragon is unique in that the player can use cards from either side of the Field as Material. What's more, the living Fortress gains 1000 ATK for each card used as a Material, and with a minimum 2 Monsters and hypothetical maximum of 12, the Dragon is able to get really big really quick.

Providing both players have a field full of Machine Type Monsters, Chimeratech Fortress Dragon can be more powerful than almost any other card on this list. 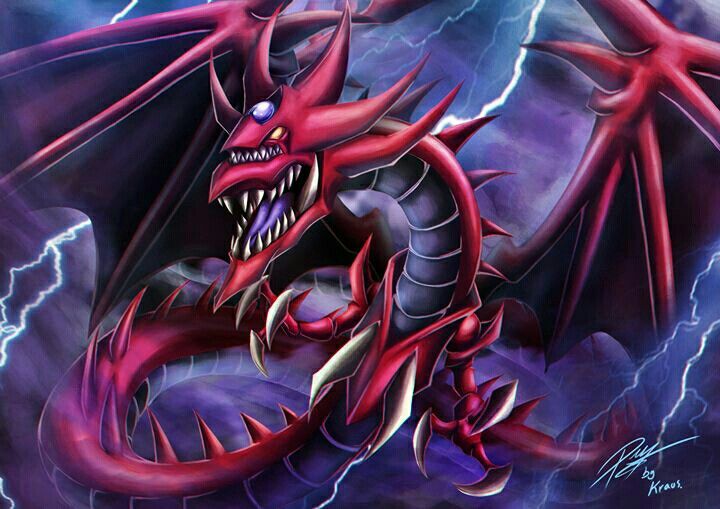 The second Egyptian God on this list, Slifer The Sky Dragon is arguably more reliable than Ra.

Another ? ATK Monster, Slifer's ATK depends on how many cards the player has in their hand. While this can vary quite dramatically, the fact that Slifer doesn't need to leave the player vulnerable to lose to a measly Sparks in order to get upwards of 7000 ATK means that it trumps Ra any day.

Of course, the 7000 ATK cap only applies during the opponent's move, with Slifer having a potential limitless ATK during the player's turn - provided they have a few Draw accelerators to hand.

At most times, though, Slifer's ATK will match or exceed most other Monsters on this list, making Yugi's Egyptian God the most powerful in the game.

The clue for this one's in the name.

Another ? ATK Monster, Ten Thousand Dragon's ATK becomes - you guessed it - a whooping 10,000, provided it was Special Summoned by its own effect.

Admittedly, its requirement is not difficult to achieve, but Tributing Monsters whose ATK and DEF total over 10,000 is a bit risky given the Dragon's lack of inbuilt protection.

Still, the most powerful legal Monster is a guaranteed game winner on an an open Field, though even attacking a 2000 ATK monster is enough to guarantee a OTK.

Though it would have been even more powerful if its original printed ATK were 10,000 (if it's Special Summoned any other way, its ATK and DEF are 0), Ten Thousand Dragon is still a tour de force, and is able to destroy any other Monsters on this list with ease. 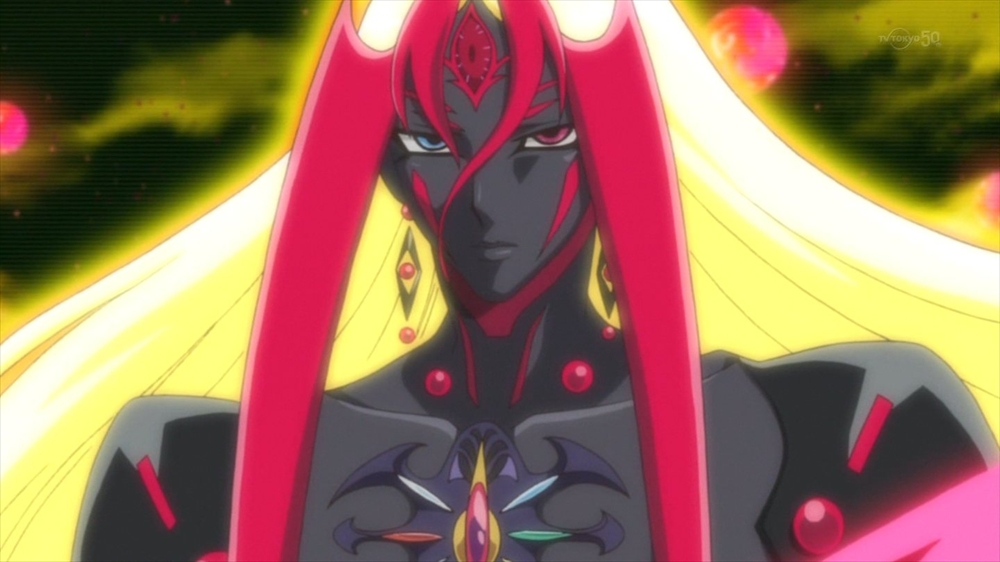 While it's unlikely that we'll ever see legal equivalents of the Don Thousand Monsters in tournament play, Don Thousand/Monster B's 10,000 printed original ATK is a sight to be seen for any fan of the game.

Monster C is more powerful still, boasting an otherwise unseen 100,000 ATK. While Monster C itself is unable to declare an ATK, it guarantees an automatic win if the opponent does not engage in battle, tasking players to attack the Don and see if they survive -- or otherwise essentially forfeit the Duel.

Above are the top 10 strongest monster (in term of ATK). Please check out our store for more powerful monster cards.