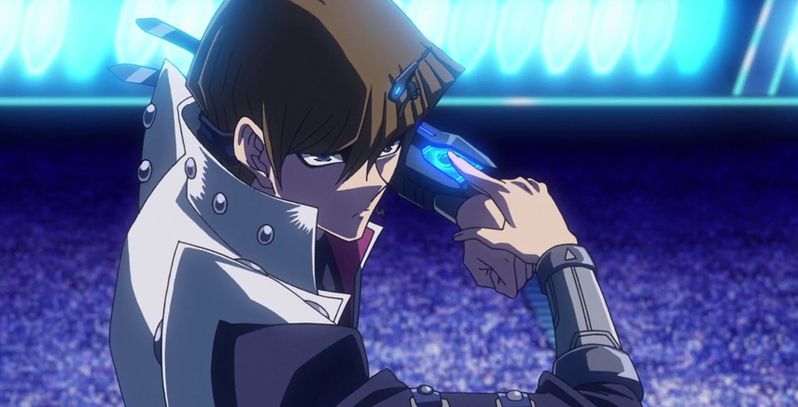 Seto Kaiba is the undisputed rival of the King of Games. He's also one of the best damn rivals in all of Shounen anime.

If it wasn't for his dogged pursuit to be the number one player in all of Duel Monsters, Yugi and Atem wouldn't have had the necessary motivation to keep improving their skills and their deck.

Of course, it takes more than an almost demented pursuit for the top to become a worthy rival in Duel Monsters. Seto Kaiba's deck is one of the best-made decks in all of Yu-Gi-Oh! Focusing almost entirely on Dragon-Type Monsters, he has several ways to improve and protect them in his deck. So let's explore some top picks! 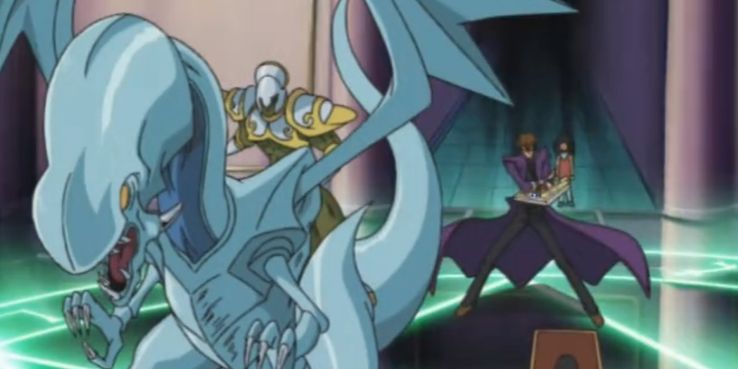 When it comes to its defense and attack stats, Paladin of White Dragon is nothing much compared to other Ritual Monsters in Yu-Gi-Oh! Where it separates itself from the pack is in its two abilities that work well with Kaiba's deck.

First, it is the bane of any face-down Monster Cards. When attacking a card in the face-down defense position, it immediately destroys it. No matter how strong it may be. This same ability also prevents the monster from flipping over, preventing any ill effects it may have. Secondly, and most important for Kaiba, if you tribute summon Paladin of White Dragon during the Main Phase of battle, it allows the duelist to immediately summon a Blue-Eyes White Dragon from their hand or deck. Getting Seto's precious dragon out on the field. 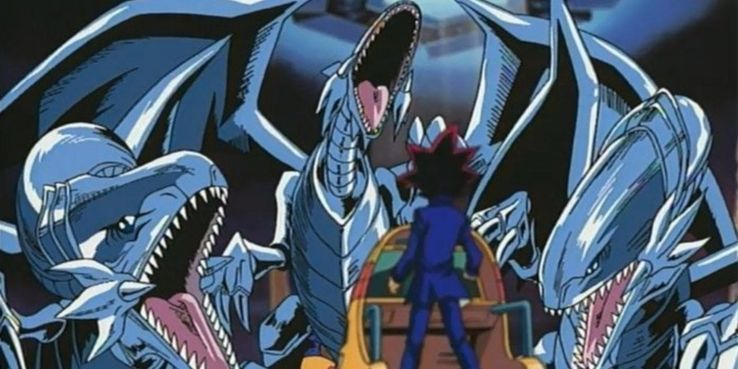 The absolute bread and butter of any deck when concerning Kaiba. He has a long history with the monster that is even longer than he thinks. Blue-Eyes White Dragon is the manifestation of Kisara. A young girl that Seto protected in his past life as Atem's loyal retainer, and the closest thing he has to a waifu.

Like Yugi's Dark Magician and Joey's Red-Eyes Black Dragon, the true reason that Blue-Eyes White Dragon makes the list is how it works great in synergies with several cards that Kaiba has used in the past. Making it more than just the sum of its already astounding 3000 attack power. 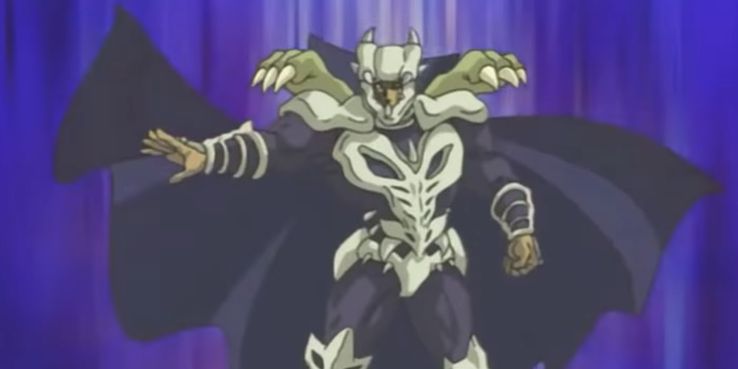 Not all that menacing despite its artwork. It is pretty low when it comes to its innate attack and defensive power. It is only truly effective in a Dragon Deck when it comes to Duel Monsters. Thankfully, Kaiba has more than enough dragons to make it shine.

When on the field, it provides valuable protection for any Dragon Monster on the field. It downright prevents them from being the target of any card's effect. Let me reiterate that: any card's effect. That means monster, spell, and trap cards have absolutely no effect on dragons other than outright beating them in attack points. 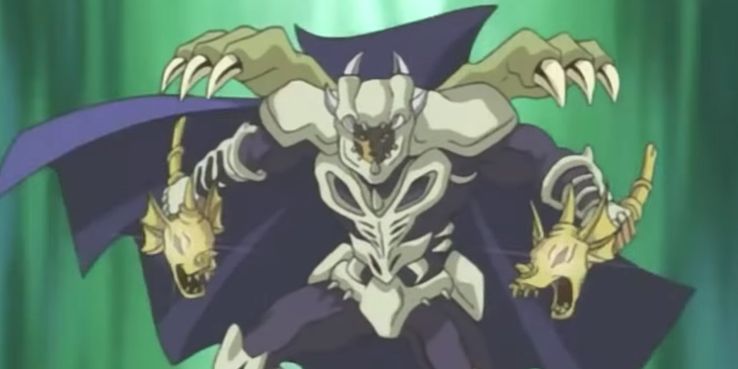 No, don't look at Lord of Dragon, look at the things he's holding. That's the Flute of Summoning Dragon. And just like Lord of Dragon, this Spell Card is invaluable to any deck with a dragon theme.

When combined with a face-up Lord of Dragon on the playfield, it allows both players to summon two dragons from their respective hands. Of course, if the opponent does not run a dragon deck, there is a good chance that the summoner will be the only one able to benefit from it. This summoning even bypassing the tributes needed to regularly summon some cards. 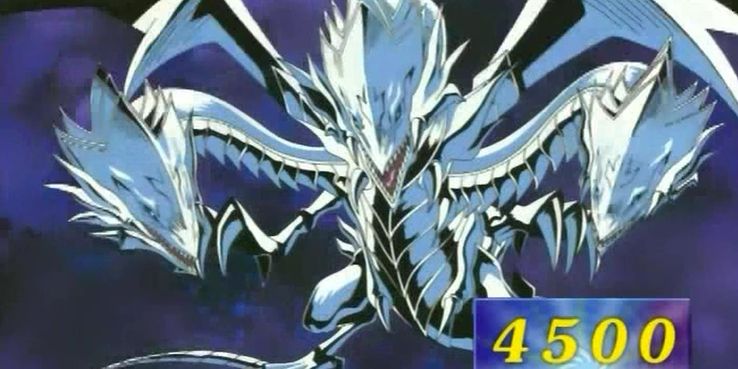 This card proves that the best way to get more power from something is to get more of it. A Fusion Card that is the diabolical combination of three Blue-Eyes White Dragons. Turning them into a three-headed hydra of pure dragon power!

It may not have been what won him the duel the first time he used it (you can thank Atem and Yugi's kind heart for that), but that doesn't deter from the fact that Blue-Eyes Ultimate Dragon is one of the purest forms of power in Duel Monsters. Starting with a staggering 4500 points in attack power, it is able to destroy most cards and even contend with some of the mythical Egyptian God Cards. 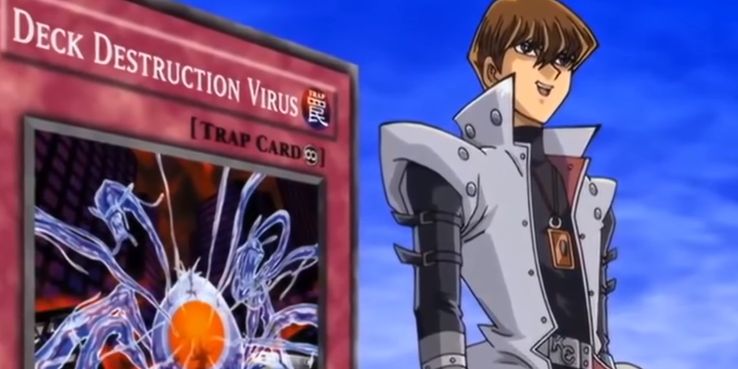 One of the few standouts in Kaiba's deck doesn't have any relation to dragons at all. Deck Destruction Virus is a simple card with a simple effect. Though, the fact that it's simple doesn't disregard its strength.

Used only in the Yu-Gi-Oh! movie Pyramid of Light, Deck Destruction Virus is a Trap Card that only activates when a Dark Fiend Monster with 500 or fewer attack points is destroyed on the summoner's side of the field. Then it proceeds to mercilessly destroy ten random cards in the opponent's deck. In a regular deck in Duel Monsters, that is 1/4th of the opponent's deck gone and into the graveyard. Talk about living up to one's name. 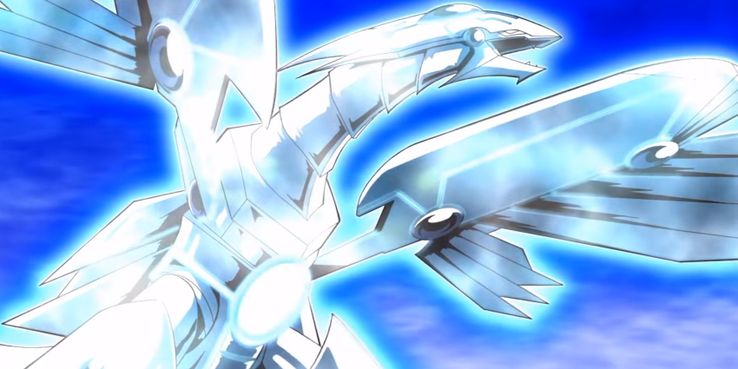 Like Kaiba's famous Blue-Eyes, Blue-Eyes Shining Dragon starts with 3000 points in attacking power. Then it adds 300 points for every Dragon Card in the summoner's graveyard. Only adding to its already impressive strength. Its other abilities are just as potent. Shining Diffusion negates any Trap, Monster, or Spell Card from affecting it. At the same time, if a certain card is troublesome, Blue-Eyes Shining Dragon can sacrifice itself to destroy it immediately. Giving this dragon a counter for almost everything. 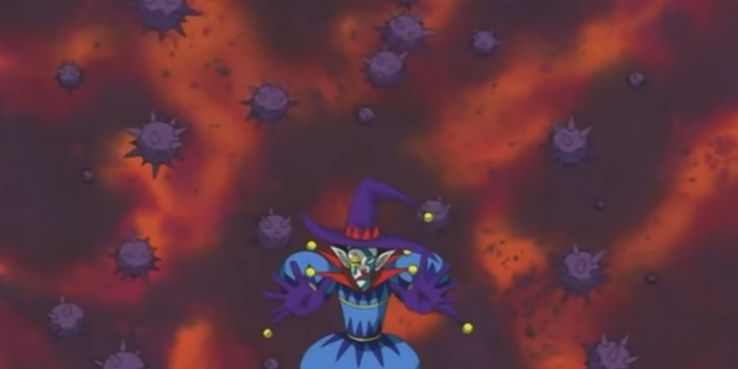 The second card with no relations to dragons at all. This Trap Card is an effective way to handicap an opponent's deck. Like the previously mentioned Deck Destruction Virus, this can only be activated after another card is destroyed. Unlike it, it's much more open when considering its tribute. Only requiring a monster with less than 1000 attack points to be destroyed. Then the real fun begins!

Upon activation, the Crush Card Virus destroys any monster on the field and in the opponent's hand with 1500 or more attack points. Then continues to do so for every monster they draw from then on. Allowing the person who activated it to check each card just to make sure. Furthermore, it doesn't affect the summoner's cards in the slightest. Allowing them to continue using powerful monsters against the weenies remaining in their opponent's deck.

The Egyptian God Cards are not meant to be trifled with. Each possessing fantastic power, durability, and skills to make them worthy of any deck. Obelisk the Tormentor being no exception to that rule.

RELATED:Ranked: The Yu-Gi-Oh: Duel Monsters Duelist By How Powerful They Are

Starting with 4000 points in attack power, that's enough to immediately destroy any duelist in the anime version of the game. From there it only gets more insane. Being a God Card gives it a number of abilities that surpass most other monsters in the anime. It cannot be destroyed, returned to their duelist's hand, or taken control of. Even if someone manages to affect it with a card, the effect only lasts for a turn. Then we come to its personal ability. If two monsters are tributed, then Obelisk is allowed to destroy every monster on the opponent's field. Allowing it to immediately win the duel with its game-winning amount of attack power.

There is no way this list would end with anything other than a version of Kaiba's Blue-Eyes White Dragon. Its bond is just too special to Kaiba to deny it any other spot on this list.

Deep-Eyes White Dragon certainly deserves its spot though. Hard to summon, but well worth its price, the Deep-Eyes can only be brought forth by having another Dragon Card that is at Level 8 or Higher (the stars on top of Monster Cards). Then it proceeds to copy the attack power of any dragon in the duelist's graveyard. Furthermore, it does 600 points of damage to the opponent's life total for every dragon in each players' graveyard when summoned. A near-death sentence in the anime where they only started with 4000 life points. It's power and skills making it one of the ultimate forms of the Blue-Eyes White Dragon.