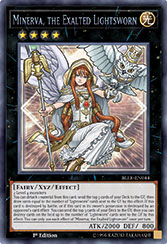 Minerva, the Exalted Lightsworn is a Rank 4 Xyz Monster that’s easy to Summon. You can Summon Minerva simply by combining any two Level 4 monsters. Minerva comes with two incredible effects, each of which can be used once per turn.

Even though Minerva, the Exalted Lightsworn shines best in Decks that use Lightsworn monsters, it’s also a powerful card to support any strategy that thrives on sending cards to the Graveyard. Many Decks can use it to load up the Graveyard with cards to banish to activate the effect of Fairy Tail – Snow. Some Decks can use Minerva’s effect to send Performage Trick Clown to the Graveyard and then Special Summon Trick Clown back to the field with its own effect.