Seto Kaiba celebrated another birthday this month, and the series is hyping up the Duel Monsters player in style. Over on Twitter, the official Yu-Gi-Oh! account posted some new artwork of Kaiba, and it shows the rich kid ready to d-d-d-duel.

As you can see below, the Yu-Gi-Oh! account posted a new piece of anime artwork of Kaiba on October 25 to celebrate the player. The sleek image shows Kaiba wearing his iconic white coat with some very tight purple pants. Donning a pair of knee pads, Kaiba looks ready to duel with his new Duel Disk set up, and the character’s hooded eyes look more than a bit intimidating.

Another Yu-Gi-Oh! legend took time to honor Kaiba on his big day. Kenjiro Tsuda, the voice actor of the character, took to Twitter to wish Kaiba a happy birthday. 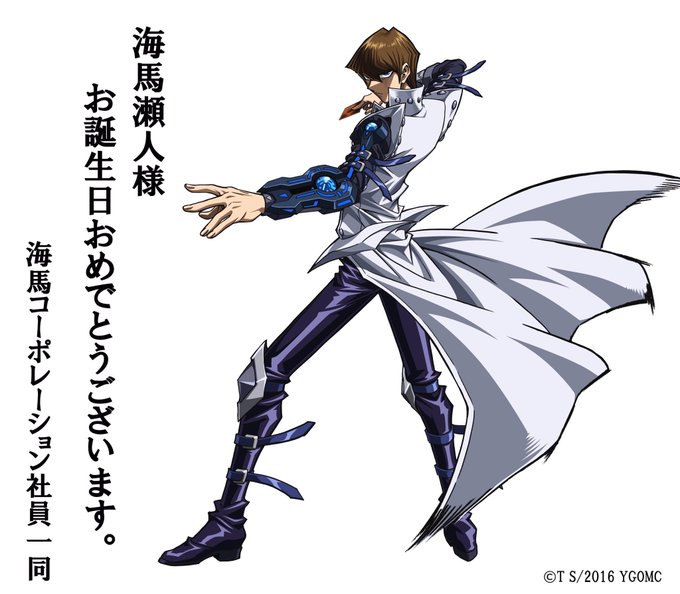 To commemorate the occasion, Yu-Gi-Oh! did try to push some of Kaiba’s merchandise. The account tweeted out several messages about some new Yu-Gi-Oh! souvenir jackets and bracelets its selling which feature Kaiba.

If you are not familiar with Kaiba, then you have a lot of lore to catch up on. The character was introduced in the original Yu-Gi-Oh! anime and continued to appear throughout the franchise in GX and movies like Dark Side of Dimensions.

The character acts as Yugi Muto’s arch rival and the reincarnation of Priest Seto, the original keeper of the Blue-Eyes White Dragon. Originally an orphan, Kaiba managed to make the CEO of Kaiba Corp adopt by using his wits. The boy grew up and overtook the corporation from his father, a move which made helped make Duel Monsters a virtual game. Kaiba’s goal in life is to become the world’s greatest Duel Monsters player, but the anti-hero usually has that dreams impeded by Yugi.

If you are not familiar with Yu-Gi-Oh! Duel Monsters, there is more for you to brush up on than you may realize. The show was created back in 2000 and follows the life of Yugi Muto, a boy who winds up completing an ancient Egyptian relic called the Millennium Puzzle. The artifact allows Yugi to tap into a spirit called the Pharaoh, and the pair are forced to battle in various Duel Monsters tournaments when others begin to covet Yugi's mysterious puzzle.