The word “hand trap” is one of the most unusual to occur in recent years in the game. It could not make sense to a player who left after the original season, or even in GX. It’s not a proper term; it’s an unofficial one that refers to monsters that can activate effects in hand that can be used throughout the opponent’s turn, often disrupting the opponent’s play and, in extreme cases, terminating their turns.

These cards have increased in popularity in the last four years because they don’t need players to set them, allowing them to prevent any of the spell/trap elimination that has been more common as the game has progressed. This list discusses the best Yu-Gi-Oh hand traps, including what they do and why they’re so great.

Ash Blossom & Joyous Spring can be used to prevent the enemy from carrying out whatever preparations they have for this turn. When the opponent uses any card (monster, spell, or trap) that has the effect of adding a card to their hand from the deck, special summoning from the deck, or sending a card from the deck to the graveyard, you discard this card.

If you have several copies of this card, you can constantly prevent your opponent from slyly summoning a powerful monster or, at the very least, postpone them, allowing you time to react.

Gorz the Emissary of Darkness

You can special summon Gorz the Emissary of Darkness from your hand when all hope is lost, your field is empty (both your monster and spell/trap zones), and you take damage from an opponent’s deck.Gorz not only has 2700 ATK, but he also has an impact that changes depending on the amount of damage you take. If the damage was from a fight, he summons a level 7 Emissary of Darkness monster token with the same ATK and DEF as the damage.

If that was an effect, you can actually deal the same amount of damage to your enemy. Gorz, in addition to being a powerful monster, punishes your opponents for large-scale attacks; the more damage they deal, the better your token or the more damage you mirror back.

Effect Veiler is a fantastic Tuner beast to have in your collection. Despite the fact that this winged beast has no attack or defensive points and only one-star level, its influence is undeniably beneficial.You should use Effect Veiler’s Fast Effect during your opponent’s Main Phase. You can transfer Effect Veiler from your hand to your Graveyard and then attack one of your opponent’s Effect Monsters with this monster card. All of the consequences of the monster you pick are negated before the end of this turn.

Outside of its first inclusion in the Starstrike Blast box, Skull Meister has only seen a few printings, only appearing in a Special Edition and Structure Deck. Skull Meister has the ability to discard itself from the hand to negate any card effect triggered in the opponent’s Graveyard.

This isn’t only limited to monsters; it can even negate spell and trap cards that have Graveyard effects. Skull Meister is a very flexible card that has been in and out of the meta for a long time, depending on how many Graveyard-heavy decks are present.

Battle FadeIf all of your monsters have been erased from the ground, or if your enemy has monsters that can disregard your monsters and assault you directly, Battle Fader is an outstanding last line of defense.

When you have this card in your possession, you can summon it and end your opponent’s combat process when they threaten to take your life points. This makes this card ideal for when you’re on the verge of losing a game and desperately need something to help you turn the tables or slow down your opponent’s momentum. 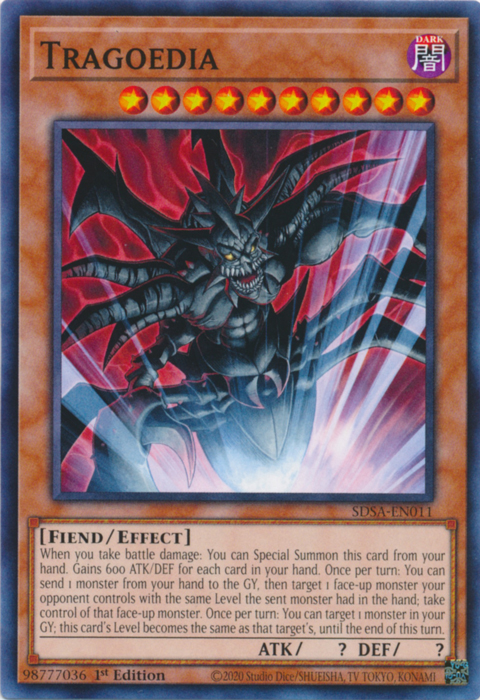 Tragoedia works in a similar way to Gorz, albeit with less stringent summons requirements. This time, if you take combat damage (regardless of how many spells/traps you control), you can special summon him. Tragoedia wins 600 ATK and DEF for each card in your hand, so if you use strong draw engines to keep your card advantage, he’ll reward you.

Tragoedia also possesses a number of unique level-related skills. To begin with, he has the rare level 10 and can be used to XYZ summon powerful rank-10 XYZ monsters. He can also target and permanently take possession of an opposing monster by sending a monster from your hand to the graveyard once per turn!

Finally, Tragoedia will change his level to match that of a monster in your graveyard (once per turn), which is helpful if you’re aiming for a certain rank in XYZ summoning or if you want to reduce the ATK-dampening of continuous spells like Burden of the Mighty.

Ghost Ogre & Snow Rabbit is a Light attribute card with zero attack points and 1800 protection points, making it a popular Tuner card. This adorable Psychic Form will assist you in removing monsters from your opponent’s side of the field that are proving difficult to combat.

You can use Ghost Ogre & Snow Rabbit’s fast effect to return itself to the Graveyard to kill the card that your opponent is attempting to trigger when a monster on the field triggers its effect, or when a Spell or Trap Card that is already face-up on the field activates its effect.

Nibiru, The Primal Being

Ever get tired of watching a combo deck’s play go on forever? Watching them summon through monster after monster while they build up some stupid board that’s impossible to get over? Enter, Nibiru, the Primal Being–the ultimate destruction.

When the opponent normal or special summons five or more monsters in a turn, the player can tribute all monsters on the field to special summon Nibiru from hand, then special summon a Primal Being Token to the opponent’s field. The downside of Nibiru is that the token it summons has the combined attack of all the monsters tributed to summon it, so the player better have a way to get rid of that token once it comes out.

This is ideal for taking out a strong beast and preventing the opponent from getting it back into action. What’s more, the definition leaves it up to you to decide what you want to take out. It isn’t limited to certain monsters or forms, and you can do it at any time.

Retro Dragon is one of the strongest Red-Eyes Black Dragon supporters in the game, and you can summon him from your hand when a level-7 or lower Red-Eyes you control is defeated by your opponent (via combat or effect) and sent to your graveyard. Retro then resurrects the vanquished monster(s) in the same place they were in when they died.

You can tribute Retro to win an extra regular summon of a Red-Eyes monster during your turn, or merely use his respectable (for his rank of 4) ATK and DEF to bolster a comeback attack, in addition to its amazing ally-rejuvenation. Finally, unlike supports like Black Metal Dragon, this dragon wears the Red-Eyes name and is a part of the archetype, making him easy to find and revive.

If the Psy-Frames had been not slightly coherent, they may have been a nightmare. Omega banished cards from the opponent’s hand simply for holding them, according to their Psy-Framegears.

In any case, Gamma could counteract a monster effect triggered by the opponent when the player controlled no cards, but this involves a Psy-Frame Driver in the deck. What’s better? It used Psy-Frame Driver to special summon itself, granting the player instant board appearance and access to Psy-Framelord Omega.

Yes, this is meant to be a “true” trap, but since it can be unlocked with the wrist, it still counts. Infinite Impermanence negates the impact of one monster on the field that the enemy governs before the end of the turn.

It can be accessed from the hand if the player does not have any cards in their possession, which means it can be activated by a player going second when the player going first is completing their combo. It also has the added advantage of negating the spell and trap effects of any spell/trap cards triggered in the same column when set, effectively making that zone worthless for the rest of the turn. It’s no surprise it’s selling for $50.

Deep-Eyes represents the Blue-Eyes family in the same way as Retro serves the Red-Eyes tribe. You can special summon Deep-Eyes from your hand if a face-up Blue-Eyes you control is killed by combat or an opponent’s card impact, and you have at least one dragon-type monster in your graveyard. If you do, deal 600 damage to your opponent with each dragon with a different name in your graveyard.

This devastating burn attack will deal tens of thousands of impact damage to your opponent, particularly if you have Dragon’s Shrine or Future Fusion in your graveyard. Deep-Eyes will also make the ATK equivalent to that of a dragon in your graveyard when regular or rare summoned, always netting at least the 3000 that a Blue-Eyes White Dragon will have.

Finally, if your fielded Deep-Eyes is defeated by a card effect (including your own), you kill all monsters your opponent controls, an excellent escape effect that discourages your opponent from using nonbattle removals, which could be their only choice given Deep-3000+ Eyes’s ATK. 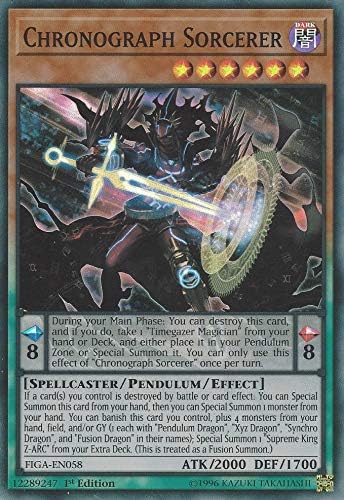 This is the first Pendulum card on the list! Chronograph Sorcerer is a text-heavy card that many novice duelists avoid, but that doesn’t have to be the case. Here’s the skinny on this beast: Level six, Dark feature, and a Spellcaster with 2000 attack points and 1700 defensive points. This card has two effects: a pendulum and a regular monster effect.