What does the Toon World card do in Yu-Gi-Oh? 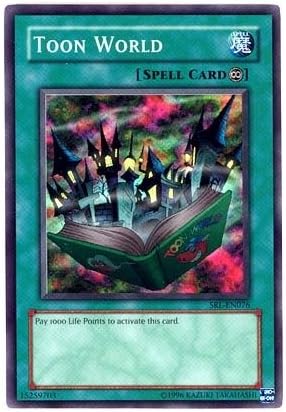 Toon World is activated by paying 1000 life points as it says on the card.

After that, it just sits on the board as a continuous spell. You might be asking why that would be useful. The answer to that is that it enables the effects of Toon Monsters.

All of the Toon Monsters except Toon Alligator can attack your opponent directly (unless they also control a Toon Monster) while Toon World is on their field as stated in their effects. In addition, some Toon monsters (such as Toon Blue Eyes White Dragon and Toon Mermaid) require Toon World to be on the field to even be summoned and are destroyed if Toon World is ever destroyed.

Some decks that don’t run Toon monsters run this because it is an additional Toon spell card that can be searched with Toon Table of Contents which helps with generating spell counters or triggering certain effects. A good example of such a deck would be Magibullets.

If you are running a Toon deck (which I don’t recommend you do competitively because they aren’t that great in today’s meta), I would recommend looking into Toon Kingdom instead as it provides additional effects while still counting as Toon World.