Yu-Gi-Oh: 10 Most Powerful Unbanned Cards In The Game

The damage has been done - These cards need to get banned!

The first-ever ban list dropped six months after the release of Invasion of Chaos all the way back in 2003. Up until that point, Konami had a select few cards in the firing line but the introduction of the legendary Chaos Emporer Dragon and its interact with Yata-Garasu literally stopped your opponent from drawing cards and playing the game and called for immediate attention.

Flash forward 17 years and the ban list has become a mainstay of current YuGiOh. Every three months Konami introduces a new ban list where cards are banned, unbanned or limited.

The intention is to make the game fun, diverse and balanced, there are over 10,000 YuGiOh cards, one of these is bound to work unfavourably with another at some point and this is when Konami step in.

Aleister The Invoker and the Invoked engine has been a meta mainstay since its release all the way back in 2017s Fusion Enforcers.

Aleister is a spellcaster obsessed with fusing his body with the elements via sacred magic. In the deck Aleister the glue that holds the core together and allows for the core to be combined with a wide variety of other archetypes.

Aleister is your main normal summon, a level four monster that allows you to search out Invocation, the decks busted fusion spell. One of the reasons he's so good is card economy as he instantly replaces himself with a key spell card on summon.

Using Aleister and Invocation you have a swiss army knife of powerful fusion monsters at your disposal. The line of play is often the same, Aleister will get Invocation, you'll fuse Aleister away alongside one of your or your opponents monsters (Invocation allows you to use your opponent's monsters as material if in the graveyard) and you'll return Invocation back to the deck to return Aleister back to your hand ready for his second ability.

His second ability is just icing on the cake allowing you to discard Aleister from your hand to increase the attack of one of your fusion monsters by 1000. When combined with Invoked Purgotrio is can the difference between winning and losing and the fact that you can add Aleister back to your hand from your graveyard via the ability of Invocation makes for ''naturally easy plays''.

The engine melds well with other archetypes and since its release its seen tournament success with Mekk-Knights, Blue-Eyes and most recently with Shaddolls.

It's worthy of a ban because its had its day in the sun and people are sick to death of the common play patterns over and over. When added to other archetypes it dilutes the duelist's creativity as it quickly locks up extra deck space (you only have 15 slots and over half will be taken up with Invoked fusion monsters) and main deck space, you need the main man himself, the field spell, Invocation etc.

Aleister was limited to one in the OCG and parts of the deck has been limited in the TCG so Konami definitely has their eye on the core. 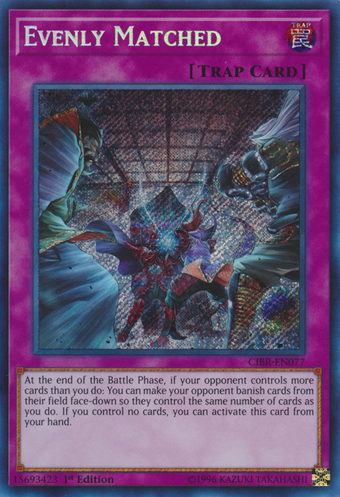 Released in 2017s Circuit Break as a secret rare Evenly Matched is a trap card unlike any other. It forces your opponent to banish (the term for removing a card from the game) face down all cards they control until both players control the same amount of cards.

The unfair part of Evenly is it can be played directly from the hand if you control no cards. The typical play patters was to allow your opponent to go first and establish a field of monsters and then in your turn drop Evenly and make them banish all but one.

One of the fairer parts of Evenly Matched is even if I play it from my hand and control no other cards upon activation it counts as one card, so if my opponent has four cards and I activate Evenly Matched they'll be forced to banish three cards. It also has to be played at the end of the battle phase which meant if you wanted to play it from your hand you're forced to give up your battle phase.

A problem with Evenly Matched was not just the £60 price tag and the fact that you needed three of them, it was the fact that it went in every competitive deck. It severely stifled deck creativity, especially in the side deck. Didn't know what to include in your side deck for a particular match up? Just jam three copies of Evenly.

Another major problem was the decks it was good against, such as Altergiest and True Draco couldn't stop it, it acted like an alternative win condition against certain decks that couldn't be stopped, it involved zero skill to play and couldn't be played around.

Ash Blossom & Joyous Spring is commonly referred to as a 'handtrap'. As YuGiOh evolved there was a time where traps became far too slow, having to set a card and wait till the next turn was not worth it.

Ash Blossom is a level 3 monster with 0 attack and 1800 defence but the stats are largely irrelevant, the card has seen a monumental amount of play based on its effects. It has three effects, one of which can be used each turn by specifically discarding it from your hand. It stops cards being added to your hand, this includes drawing cards outside of your draw phase. It stops you sending a monster from your deck to your graveyard - most decks do this, and lastly, it stops a monster from being special summoned directly from the deck.

So in the current metagame it stops Pot of Desires, Dragon Shrine, Card of Demise, or any monster that has a search effect when you play it. The list goes on and on. There was a point in time when Ash Blossom commanded a massive £100 price tag, and you definitely needed three for your deck.

In fact, when it was printed back in Maximum Crisis it was the death of certain decks at the time, specifically the world championship-winning Blue-Eyes deck. Ash has been semi-limited to two in the OCG but nowadays Ash can be found everywhere across various rarities meaning the average price is around £8.

The chance of a ban or limit is highly unlikely but there was a time when duelist wanted it gone because of how versatile and how expensive it was.

7. True King Of All Calamities 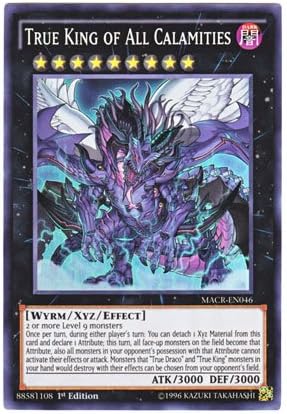 Probably the fairest card on this list, True King Of All Calamities is a rank 8 XYZ monster with 3000 attack and defence. Its ability is one that literally stops your opponent from playing the game for one turn.

True King has become easier and easier to summon, once limited to certain decks the introduction of Crystron Halqifibrax has made True King easier to summon for nearly every deck. Going first and making this colossal monster is a breeze and it's not fair that you get to go crazy with your monsters but your opponent can't do anything with theirs.

In general, cards that prohibit or stop your opponent from playing the game have no business being legal.