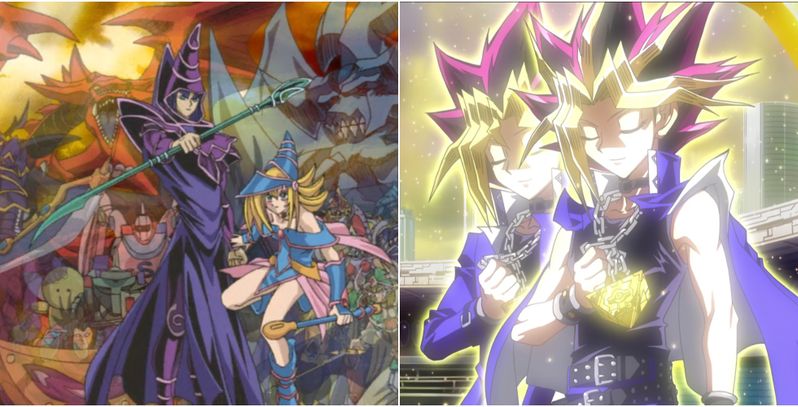 For anyone who looks at Yu-Gi-Oh! from afar, it’s easy to believe that the company has long forgotten about the card game’s humble origins as a game invented to entertain an Egyptian prince.

It’s easy to believe that this game hasn’t looked twice at the monsters of old in ages. But someone believing that would be mistaken, as cards like Red-Eyes, Blue-Eyes, and even the Dark Magician Girls have all been receiving support fairly continuously since Duel Monsters came to an end over a decade ago.

In fact, only a few years ago Yugi’s Dark Magician deck got a huge amount of support. So with this list, we’re going to look at all the new tricks that have been taught to our favorite mage.

Magician of Dark Illusion was a retrained version of the Dark Magician. While on the field its name is Dark Magician, which helps when it comes to using certain effects in the deck. In a cute reference to Dark Magician, the card’s ATK and DEF are switched from the original monster, giving it 2100 ATK and 2500 DEF.

The card is able to special summon itself if the player can activate spells and traps on their opponent’s turn, and while it’s on the field if they player can active spells or traps it’ll special summon a Dark Magician from the graveyard. Combined with the protection effects from other cards in the deck, this allows for easy ways to summon Ebon Illusion Magician.

If Ebon Illusion Magician has a weakness, it’s that despite being a Rank 7 monster, it’s got identical stats to the Dark Magician. Given that it’s comparatively harder to summon, it probably should have been slightly bigger. However, it’s effect is great enough that attack becomes a bit less important in the game.

This is a fairly simple magic card with an ability that’s easy to underestimate. Illusion Magic allows players to add up to 2 Dark Magician cards from their deck or graveyard. Grabbing two vanilla monsters might not seem great, but its status as a quick play spell card means it can be used on the opponent’s turn to trigger many of the other cards effects.

Better yet, because it can pull from deck and graveyard, the player can utilize all three copies during the entire duel, if they have to. This feels like exactly the kind of trick Yugi would’ve played during the original series to get all of his Dark Magician cards in hand.

The only drawback to the card is once it’s destroyed it costs the player all of their monsters. Still, it’s the kind of high-risk card the main series protagonist would rely on.

Magician Navigation is what the new wave of Dark Magician cards needed to hold them together. It allows a player to summon Dark Magician from their hand, then another Level 7 or lower Spellcaster from their deck. This card activates nearly everything else on the list and helps Dark Magic Circle banish cards even on the opponent’s turn.

This card was better in the past, but it’s still solid now. When it’s summoned, players can retrieve one spell in their graveyard, giving them access to certain power cards that otherwise would be usable once per duel.

The card also banishes monsters it does battle with, meaning outside of specific exceptions, those monsters aren’t coming back. Considering this card has 2800 ATK, this means a lot of monsters are about to get banished.

This is one of the best support cards made for the Dark Magician. Upon playing the card, players can take a look at the top 3 cards of their deck, then add a Dark Magician or card containing the words “Dark Magician” in their card text. It’s like digging around for a rabbit in the hat, except the rabbit is a lanky spellcaster. But those aren’t even the best parts.

The best part is the player can banish a card on the opponent’s field if a Dark Magician is Normal or Special Summoned. Since this effect works during either player’s turn, that means they can abruptly banish cards the opponent controls on the opponent’s turn. If Yugi had this card during the original Duel Monsters, Kaiba might have just quit.

RELATED:Yu-Gi-Oh!: 10 Coolest Monsters In The Series

As would be expected of a card focusing on Dark Magician’s iconic weapon, Magician’s Rod aids the player in retrieving some of the Dark Magician’s tricks of the trade. When it’s normal summoned, the card can add one spell or trap that specifically lists “Dark Magician” in its card text.

It can also Tribute Summon a Spellcaster monster to revive itself if the player activates a spell, trap, or monster effect during the opponent’s turn, but there’s little point in doing this considering nearly everything else in the deck would have better ATK and DEF. Still, considering how incredible some of the spells and traps are, this is a must-own for Dark Magician fans.

Referencing the Dark Magician’s signature clothing, Magician’s Robe has a quick effect that can activate at any point during the opponent’s turn, allowing the player to discard a spell or trap to special summon Dark Magician from the deck.

It can also special summon itself back from the graveyard if a spell, trap, or monster effect is activated during the opponent’s turn, allowing it to revive itself on the opponent’s turn for protection or easy Rank 3 plays on the next turn. It’s got 2000 DEF, so running it over won’t exactly be easy.

One of the better things about all this Dark Magician support is that it manages to keep Dark Magician itself relevant. They didn’t just displace the original card, they made it integral to the way the deck is played. It’s still a vanilla monster which is a weakness, but it’s high ATK and level go a long way towards making it useful.

At 2500 ATK it can run over most monsters that weren’t summoned from the extra deck, and being level 7 gives the deck access to some powerful Rank 7 Xyz. There’s Ebon Illusion Magician for starters, but the deck also has access to cards like Number 11: Big Eye, all thanks to the original Dark Magician.